Hello Folks, so it’s been a while and my apologies that it’s taken this long to put the transcripts up from our open space event at Bristol Festival of Puppetry. This was due to a combination of some very bad camera work by me – so the written notes  were a bit blurry and a camera fault that turned everything upside down. I love technology (gnashes teeth and mutters!).

Huge thanks to Simon Day and Sarah Kingswell from Theatre Bristol for facilitating this event and to everyone who came along. Please do add your own comments or feedback. The discussions are not closed and we really want to develop the conversations.

An invitation to come and talk about puppetry and what matters to you.

If puppetry is the act of bringing life to the inanimate are we all puppeteers?

Can puppetry retain its anarchic spirit as its commercial success grows?

At previous Festivals we have discussed the growth of puppetry and its increasing public profile as it steps away from the cultural margins and becomes once again a popular artform. However, we are all too aware that for all the success of War Horse and other large scale productions in bringing puppetry to a wider audience, old prejudices die hard: the public perception of puppetry as “just for kids” or “seaside entertainment” still seems well rooted. It is as if the puppetry in these productions is perceived as the exception to the rule, rather than a reflection of the rich and diverse artistic medium which owes as much to the principles of engineering as it does to theatrical considerations.

As Puppet Place has grown over the past few years, we have become increasingly conscious that the public interest/perception of puppetry is reflected in the demand for the artform from the performing arts industry and a lack of understanding about the processes and work involved in creating high quality, inspirational puppetry. While this can be frustrating, we are all too aware that the solution lies in our own hands.

We have been exploring some different avenues to help ourselves answer these questions, one of which is whether puppetry is more helpfully framed within an “animation/film” category rather than a “theatre/drama category”. This is leading to some interesting conversations at Puppet Place!

How do we capitalise on the puppetry successes to overcome long held prejudices for good?

How does our diverse community, with practitioners coming from myriad backgrounds, rally together to develop understanding of the artform and improve working conditions?

And finally, how do we maintain puppetry’s everyman quality alongside growing the recognition for the unique skills and craft of the professional puppeteer?

These are just some of the questions and musings that exercise us on a daily basis. We know there are many other questions and perspectives out there.

We believe that now is the right time to ask “What Next?”, at the Festival where many people and different opinions will gather, at a time when puppetry has staked a claim on public consciousness.

This will not be a conventional meeting, we’ve asked Theatre Bristol to facilitate an Open Space event.

Although Open Space may be new to you, it has been used productively all over the world. It is an interactive and inclusive way of structuring a meeting that allows you, the participant, to set the agenda. It is a dynamic way of talking about complicated and difficult things.

A strength of Open Space is its ability to unite groups of enormous diversity. So what do you think? Let’s take charge and think imaginatively about how we can make change happen. This invitation is open to everyone, so please pass it on to anyone you think might be interested. We hope to see you there.

Do we need a dedicated puppet theatre in Bristol or the South West?

Puppetry as a display of craft – How was that made?

Why do many directors cast actors and dancers as puppeteers?

Is a crash course in puppetry enough?

Do puppeteers need to be actors also?

Puppetry and Board Games

Puppetry as a thought experiment

Do we need a dedicated puppet theatre in Bristol or the South West?

No we don’t but we’ll take the cash! X

Puppetry programmed in existing venues encourages new audiences… would a dedicated space attract a limited audience of “in the know”?

Yes!! Is it a dedicated adult puppet theatre?

Why are we attached to the word puppetry?

[this transcript might not be in the right order…but here goes!]

Why are people still flabberghasted by puppetry when they see it?

Should puppetry still be considered special? Why isn’t it in the main theatres? Puppet Theatre is very broad there are many different categories.

Figure/Puppet Theatre (traditional) in Norway is dying, there is no education , no new generation carrying on the traditions.

Same lack of training in animation in Germany. However puppetry is “normal”  in Prague. In other countries the ideas are good by the craft is bad.

It feels like there is a 30 yr gap of “nothing” between generations of puppeteers.

Why do we now have to “sneak” puppetry into theatres and “normal” theatre festivals?

It is better to have puppetry programmed across theatres. However it could be useful to have standard rate cards for puppet fabrication in the UK and other countries as there is in Norway.

If puppetry is an island is that a bad thing?

Australia suffers from this type of cultural isolation due to geographic distance and because it is still a young country. It is borrowing from other countries and morphing ideas and artforms to make its own culture

There is an issues with a common international language for puppetry/figure theatre/visual theatre e.g.

Festspiele – idea from Germany and other parts of Europe. A massive cultural festival on a huge scale – defies categorization. Is Edinburgh Fringe a bit like this (although dominated by comedy??)? 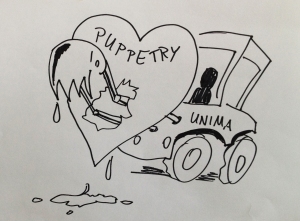 Is UNIMA a dagger in the heart of puppetry innovation?

Is it keeping puppetry from expanding? It doesn’t fully represent its community, it could be more useful.

UNIMA is great in some countries (USA, SA). It helps preserve the traditions and if there are strong traditional roots this means that skills and artforms come back.

UNIMA where are you? What should an international puppetry association look like?

How do we keep the value of the craft and knowledge yet have the spark of innovation?

What do we mean when we say we are fighting for an identity?

Puppetry as an island, verdant and fertile but with good access to the cultural mainland.

Do we want the island to welcome all comers? Does this then become too commercial?

If you call yourself a puppeteer is what you do, therefore puppetry?

Are we all sometimes cliques?

What is the importance of immediacy of live puppetry vs recorded performance?

The body – the representation actual or mediated?

How does a character connect to the audience?

Does the level of abstraction make it easier to “criticise” a puppet?

As an audience (live) do we respect the space of the actor/puppet more than when recorded?

Live performance is a lived experience, the audience is involved not passive, but is there a value to being able to step out of the live and lack of responsibility?

Simplicity of live vs overstimulation of edited or recorded

Is the brain lazier with attention to a precious moment when presented with a single point of view?

Do puppets (generally) get a point across more directly than a person?

How does technology drive innovation?

Could you stream a show from a puppet’s point of view and use as projections in theatre?

Is the exaggerated nature of animation on stage possible?

Is CGI animation still too “new” to connect with?

Acting out a scene vs motion capture

That’s the end of the transcription, let us know your thoughts. If there is anything you want to add to the sessions convened or something completely different we want to hear from you.

2 thoughts on “Transcript from Puppetry What Next?”